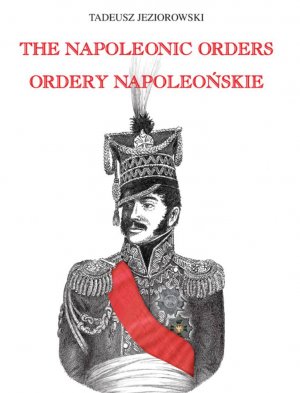 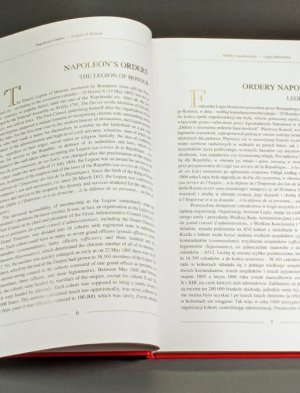 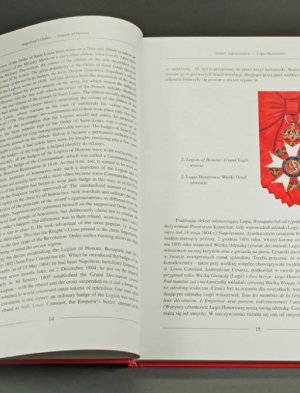 FRAGMENT of the chapter: Napoleon’s orders - the Legion of Honour

General Weyssenhoff’s memoirs confirm a battlefield nomination was the surest way of obtaining the cross. The author gives an account of the beautiful attitude of a Polish officer.
(After the Battle of Smolensk) Napoleon, glad with the operations of the Polish army, came in person to our camp and, inquiring about the tiniest detail, generously conferred his crosses to all ranks […] The Emperor, having received from a colonel the testimony of one of the central company of a certain regiment, awarded the cross of the Legion of Honour to the commander of the company; having heard that, a temporary commander, a lieutenant, approached the emperor and said to him:
– »Sire, la récompense, que vous m’accordez ne m’appartient pas; c’est au capitaine, qui nous a commandé, qu’elle est dûe.« [Your Honour, the award you wished to lavish on me is not due to me, but to the captain, our commander].
The Emperor was surprised:
– »Et oú est donc le capitaine?« [Where is the captain?]
– »Blessé, á l’ambulance« [Wounded, in the hospital].
This act of the lieutenant (whose name I am regrettably forgetting now) moved all the persons present so much that the generals standing behind the emperor clapped their hands. Napoleon himself remained silent, visibly touched, and the lieutenant modestly and with dignity stood before the emperor, awaiting the decision. Both were decorated.
Another touching scene was described by Załuski, quoting Wincenty Dobiecki’s commemorative text about the Battle of Montmirail on 11 February 1814, where Dobiecki, with his official chevau-légers squadron captured a Prussian infantry battalion:
While I was escorting them [over 400 captives], the emperor notified me via general [Claude-Étienne] Guyot that he would give me a cross of the Legion of Honour, and when I showed to this general that I am an officer of the Legion, he told me: – »Allez parler à l’Empereur« (go, talk to the emperor). So I approached the emperor from the side and when I repeated a few times »Sire!«, he turned towards me and asked: – »Que me voulez-vous?« (what do you want from me?). So I replied that I am the captain who captured a Prussian battalion. – 'So I offer you a cross.' – 'I already have the Officer’s cross, Your Honour!' – 'What is your rank, youth (jeune homme)?' – 'I am captain.' – 'I therefore appoint you head of a squadron' [lieutenant colonel]. At that moment I was so flabbergasted that I stood completely numb.”

Tadeusz Jeziorowski is an eminent expert in Polish and world-oriented faleristics.  For many years he is a member of the team for addressing and providing opinions on matters related to orders and distinctions, heraldry and vexillology in the Presidential Office of the Republic of Poland and in the Heraldic Commission at the Ministry of the Interior and Administration. He is also a part of the Association of Old Arms and Uniforms Amateurs, the Polish Heraldic Society and German BDOS (Deutsche Gesellschaft für Ordenskunde e. V.).

“The uniforms of the Polish Army of the Duchy of Warsaw, and thus the uniforms worn by the Principals of the Duchy (as well as by those who achieved their general rankings in the French or Italian forces), usually displayed two decorations – the Polish Military Cross, today known by the colloquial name, the Virtuti Militari Cross and the French Legion of Honour.

The Polish cross and the starry cross of the Legion are distinct tokens of honour for bravery and hardships in battle; hence the possession of these decorations was a reason for praise. However, other signs of high regard were displayed next to the Polish orders and Napoleonic eagles of the Legion on the breasts of generals’ uniforms at that time. The most important were the two Napoleonic orders, created by the Emperor himself: the Order of the Iron Crown (Italian) and the Commemorative medal of the 1859 Italian Campaign. In addition, there were badges from those nations whose thrones were occupied by relatives of Emperor Napoleon: the Westphalian Crown, the Two Sicilies, and the Order of Spain. They were complemented by German orders; of Bavaria, a constituent in the Confederation of the Rhine, and of the Rhineland-Palatinate, formerly united with Bavaria, there were the Order of Saint Hubert, the Military Order of Max Joseph, and the Order of the Palatine Lion. Two of the most exalted Polish orders, the Order of the White Eagle and the Order of Saint Stanislaus, were sparingly given – few generals received them in earlier years.” [Fragment of the introduction]

The author sketches the history of orders worn by Polish generals in the Napoleonic era, draws us nearer to the history of a given order’s creation, describes in detail its appearance and the material from which it was made, and also provides the names of the generals who received them, the date, and the circumstances surrounding the particular distinction. The text has been enriched with numerous interesting quotes from diaries of that time period, which refer to the events related to the awards of the orders. It also contains two tables with specified badges (including their classes) and the year of record. The first table concerns 58 generals of the Duchy of Warsaw, and the second, 10 Polish generals in the foreign service. In addition, the publication contains an index of names, an extensive bibliography of Polish and foreign literature, and a list of illustrations.

The main illustrator of this colourful volume is the well-known painter Ryszard Morawski. His faithful and precise gouaches perfectly complement the texts respective to the given order.

The book is meant for Polish and foreign readers of English alike. The even pages include an English translation, and the odd pages, the original text in Polish. The publishers were guided by the idea of reaching out to readers all over the world, who are interested in this subject. For the first time, the orders of Polish generals have been written of in our publication The Army of the Duchy of Warsaw. Generals, aides-de-camp, staffs. This book is a comprehensive development of a hitherto little-known matter.